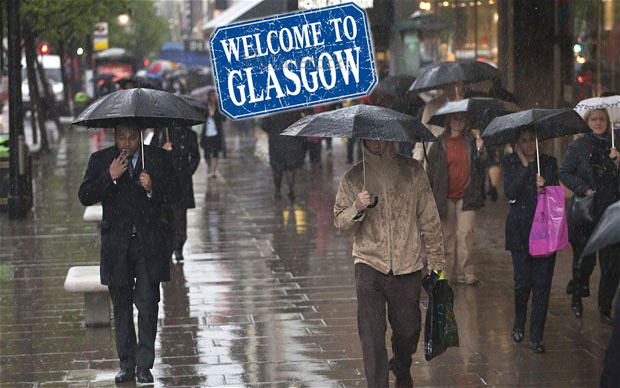 Like most people in Scotland and for the matter the rest of the UK, and also Ireland, I’m obsessed with the weather.

God knows why. If there’s one thing that you can be certain about in this country it’s that the weather will be pretty consistent. Pretty consistently crap that is.

Here I sit on a mid-June day looking out over the local landscape and rather than be bathed in the balmy evening sunlight that you would expect from this time of year instead it’s grey, overcast, damp and generally underwhelming. The only clue to the fact it’s the summer is the heavy foliage on the trees and surrounding fields.

For the past 4/5 weeks, it’s actually been pretty consistently good. Warm, sunny and dry. Just the way everybody likes it and what you would expect from May / June. But that all came crashing down on Saturday when the heavens literally opened and rain of near biblical proportions lashed down. About a months worth of rain dropped in 90 minutes. Flash flooding, lightning storms, rumbling thunder and a general look of bemusement on everyone’s face confirmed that the lovely weather we’d been having was over, for now at least, and only the most optimistic of souls would predict that it will return anytime soon.

The reality of living in Scotland is that the weather is rather, well…… samey, in that it’s more or less the same all the time. That being disappointing. Strange that it is disappointing to us all though in that it’s what we usually get. Normally, disappointment arises when your set expectation isn’t met. Therefore why we ever expect it to be nice weather-wise here is a mystery in itself because we have nothing to base it on.

People always hark back to the past with the weather. “When I was a lad the summers were glorious and the winters brutal.” tends to be the common claim. The truth is though that is complete and utter bollocks. I’ve lived on this earth and therefore in this country for 36 years and seen a lot of summers come and go. The truth is I could count on both hands the number of truly memorable summers and winters for that matter that I’ve experienced these past four decades and still have fingers left over. It’s funny how nostalgia clouds our memories. Our fondness for out carefree youth sees us filter out anything that may smudge such memories and therefore the actual reality.

When any type of extreme weather does visit these shores it’s generally met with shock and awe. In the winter especially. This past winter we had snowfall in late February and early March which was like nothing I’d ever seen before. A 48hrs blizzard occurred that buried most of the central belt of the country under several feet of snow and the swirling winds that accompanied it resulted in snowdrifts that blocked off doorways and created temporary barriers across fields and at the side of roads. Everyone complained en masse of course but the reality was that everyone loved it. For all the complaints about not being able to get out to buy well fired morning rolls or take the dogs out for a walk the added bonus of not having to go into work or drops the kids at school completely outweighed that. I work from home so it made no difference to me but I could see the gleeful faces of neighbours as they looked out of their windows and sipped their tea no doubt excited at the possibility of what Netflix boxset they were going to spend the next few days binge-watching. In truth the weather was horrific. My normal 10 mins sojourn to the local corner shop was trebled and when walking against the drift I had genuine problems breathing. In amongst all that chaos, I saw some madman out jogging. I can only imagine how that conversation played out in his house before he left:

“A blizzard with 8 feet drifts out there Margaret. Looks like I’ll only be able to do a 5K tonight.”

I was genuinely concerned about my neighbour. He is in his early 70’s, no longer has a car and generally walks or takes public transport everywhere. He lives by himself and likes to get out and about quite a lot no doubt to alleviate the boardroom of what awaits him indoors. When the weather began to clear up on the third day and people began bearing the outside again to clear their driveways etc I encountered him for the first time since the blizzard had visited us. He told me he had got on okay but that the weather had proved a major inconvenience. I suspected this was referring to him not being able to get out of the house but he informed me he was actually referring to the fact it took him nearly an hour to get down to the local pub on both days which is about 40 mins longer than it normally does.  I was amazed that the pub was even open. Not only was it open apparently but thriving. Indeed outside of Christmas and New Years Eve, he’d never seen it so busy. No one could get into work or Uni but they could make it to the Crow Tavern it seems. Boozing, like life, always finds a way.

Strange to think that was only three months ago. Now here we are in the midst of summer. Time flies whether you’re having fun or not.

The summer generally has an unusual effect on people in central Scotland. The slightest glimmer of sun and a large cross-section immediately goes shirtless. Well, the males do at least. ‘Taps aff’ weather it’s called. That’s any weather which involves decent sunlight and temperatures above 14 °C. Parks and streets come alive to the sound of happy hardcore music and underage drinking in the subsequent euphoria. It really is quite a sight.

However, the ruling Scottish National Party weren’t so keen on the party atmosphere a good summers day can deliver pointing to a huge spike in violence and civil unrest during such weather outbreaks. So in order to curb said behaviour, they dramatically increased the price of the booze which they believe the offenders are most likely to consume. Almost overnight cheap ciders and alcopops doubled in price. So far though, based on my observations of the debris whilst jogging through  Springburn park at least, it’s had little impact. The cider and other affected tipples have just been replaced by Desperado, Stella, Smirnoff Ice and bottles of Echo Falls wine. Buckfast is also still on the menu though, big time. The bottles are smaller but it’s the gesture that counts. Just like in winter boozing always find a way. 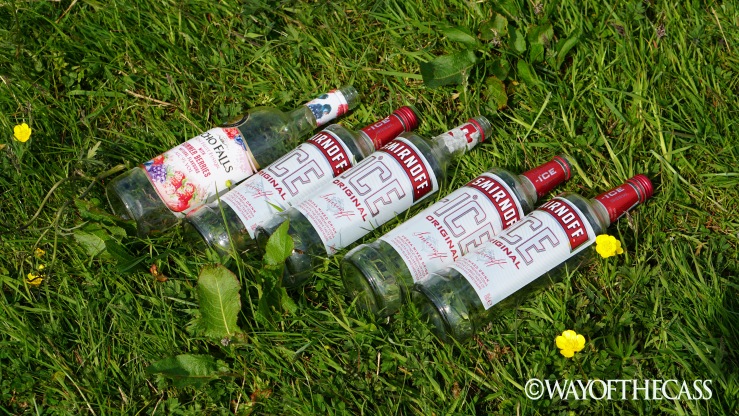 The only season, we get right here is Autumn. That’s the season where the leaves all fall off the trees, the days become much shorter and it’s actually meant to be overcast and damp. That we do well here. Indeed so well it’s on the cards 365 days a year. I still hear some people coming out with the old chestnut ‘We can get all four seasons in a day.’ but the truth is we only get two types of weather as standard in this part of the world. Those being ‘raining’ and ‘about to rain’.

Anyway, that’s my two cents on the weather. It’s a pretty big subject but I think I covered it all. I’m off to check the weather forecast. Hope we get a nice day tomorrow.