Magnum, p.i. was a long-running 1980’s detective show which prevailed from 1980 until 1988, so almost spanning the whole decade.

It outlasted most of its contemporaries whilst encompassing 163 episodes and made a bona fide star out of Tom Selleck, his prominent moustache and bad Hawaiian shirts.

It’s not really comparable to most of the other shows on here. For a start, it was targeted more at adults than kids, unlike the other shows. Not that it was particularly adult in nature or anything but it was certainly more mature and orthodox than the others. It also didn’t feature any real gimmicks as such or prominent technology.

It was basically about a P.I. (Private Investigator) named Thomas Magnum played by Selleck and set on the island of Hawaii.

Of course, there is a backstory and being an ’80s show who you can bet it’s a cracker.

So for a start, Magnum’s full name is Thomas Sullivan Magnum IV. He’s an ex-Marine, Navy Seal, Naval Intelligence officer and Vietnam war veteran with multiple military decorations. I’d list them all but it would take too long.

His wife Michelle died during the fall of Saigon and upon returning to America he became a private investigator in Hawai, spending most of his time hanging around the beach, catching rays, listening to baseball games on the radio and slowly drinking himself into oblivion via his two favourite tipples, those being Old Düsseldorf beer in a long-neck bottle and Scotch on the rocks. Well, at least he had taste.

Incidentally, don’t go looking for Old Düsseldorf in your local off-licence, supermarket or online. It doesn’t exist. They just made up the name for the show.

Just when you think life can’t get any better for Magnum if does. In an incredible twist of fortune, he is employed by local celebrity millionaire author Robin Masters. Masters remains unseen but is voiced in occasional episodes off-screen by Hollywood legend Orson Welles. Apparently, Masters amassed his fortune via selling trashy-airport novels.

Below is an excerpt from one of his masterpieces:

“It was the Paris of Hemingway and Fitzgerald that Mark sought, even though he knew it only existed on celluloid and in the yellowing pages of books. A Paris of absinthe and rainy afternoons and warm women. He concentrated on those images when the pain from the….
(short while later)
A laser beam cut through the night like the singing sword, lighting the black with Merlin-like pyrotechnics. It was at that precise moment that Mark realized Madonna had tried to kill him. It was absurd, but all Mark could think was that the sound of the laser shattering the window was precisely like the tinkle of ice against crystal….
(short while later)
He tried to remember that she had sold the laser chips to Vladimir and because of that he could die, but he couldn’t resist her. The soft silk of her gown clinging suggestively to her body seemed to Mark like the label on the bottle of a Lafite Rothschild, which could only hint at the pleasures that lay within.”

Anyway, Magnum’s job description under the employment of Masters is never really detailed. However, it involves him getting to live a life of luxury with endless resources in Master’s 200-acre beachfront estate called Robin’s Nest as well as access to his Ferrari 308 GTB/GTS supercar which is the closest thing the show has to a gimmick.

The Ferrari isn’t self-aware though, can’t fly and has no weaponry capacity. It just looks cool, goes real fast and cost a shed load.

Such amenities allow Magnum to pick and choose what jobs suit him on the P.I. front but don’t worry, he usually chooses good ones.

Higgins is an upstanding, well-spoken former ex-British Army sergeant major and abides by a strict, regimented adherence to discipline and manners.

This, of course, flies in the face of Magnum’s messy attire, maverick nature and regular daytime alcohol consumption.

Together they have an ‘odd couple’ dynamic going on.

Higgins is capable when called upon and specialises in karate chops as can be seen below. He is the official house sitter for Robin Masters which makes you wonder what the hell Magnum is actually being employed to do if indeed he’s doing anything. Theories abound on that one.

Higgins is often exasperated by his housemates shenanigans and he expresses this often by pronouncing “Honestly Magnum……..” and “Oh, my God!” regularly throughout the shows run.

Magnum’s two regular sidekicks throughout the show are island helicopter charter pilot T.C. Calvin and local bar custodian Rick Wright who’s real name is Orville but he refuses to acknowledge it which I guess is understandable.

Both of them are ex-Marines who served with Magnum in Vietnam.

Unlike most Hollywood film depictions of Vietnam veterans, none of the trio seem mentally scarred, unstable or hung up on their war experiences.

T.C. often refers to Magnum’s housemate as “Higgy Baby” much to Higgin’s dismay.

Rick fancies himself as a bit of a ladies man and likes to gamble though he usually comes up short on both fronts.

His biggest gamble though is on his friendship with Magnum and in that respect, he is a winner.

The main cast can be seen below. I’ll let you guess who’s who. 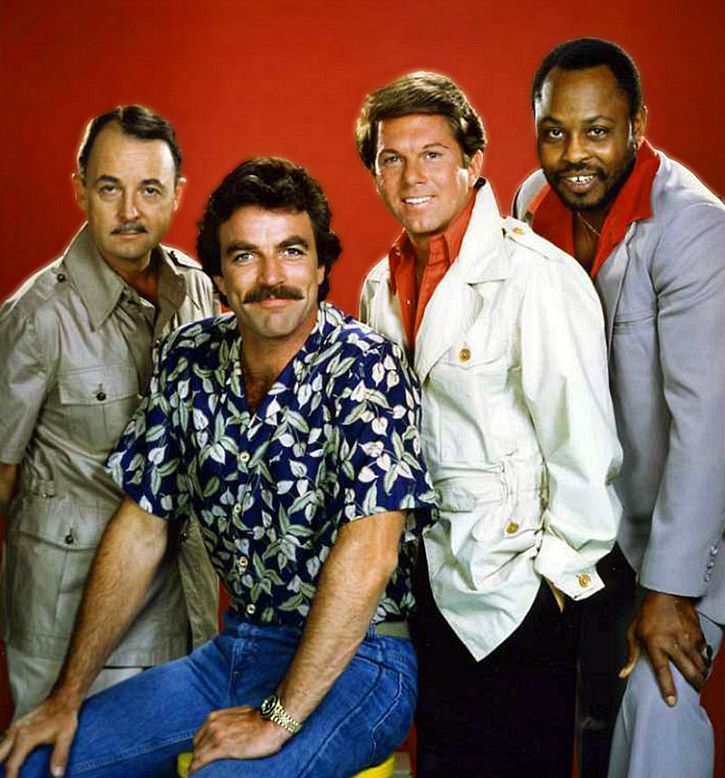 The show was pretty comforting in that it was an ever-present and never really changed, sticking to a tried and tested formula of ‘mystery of the week’ for the best part.

The fight sequences were generally awful but occasionally the light-hearted escapades and brief violence did descend into some pretty cold ruthlessness in that Magnum actually kills a few people along the way something which you rarely saw if ever in contemporary ’80s mainstream shows. There was, of course, the previously covered Equaliser but that was hardcore and only came on when the sun went down and the kids were all tucked up in bed.

One of the few recurring storylines was the reappearance of Magnum’s previously presumed dead wife Michelle. It turns out she was alive and well the whole time and was actually working as an anti-communist US agent.

Upon hearing that her previous husband’s death was also faked, she got an annulment from Magnum due to her strong Catholic beliefs in the principle of fidelity, reunited with her original husband who was also an anti-commy agent and the pair went off to fight the spread of international communism together after allowing Magnum to believe she was dead.

She returns to a shocked Magnum in season two, though he pretty quickly gets over it, the pair have an affair and she gets pregnant. So it looks like her Catholic morality went by the wayside pretty quickly. Magnum gets custody of his daughter in the final series after Michelle was actually killed by a car bomb. At least we think she was. With Michelle, you just never can tell

The reason for the show’s success is simple. Magnum was an everyman. He could be lazy, unmotivated, haunted, insecure, modest, kind, cold and portray various other aspects of the human emotional spectrum along the way.

Added to that he had financial problems and often didn’t get the girl something which most of us can relate to, indeed in my case at least on an almost monthly basis.

Again these were two unusual characteristics of the narrative for the time and things that Magnum’s contemporaries such as the charismatic Michael Knight and the debonair Face from the A-Team just wouldn’t stand for.

Unlike them, he wasn’t a cartoon character and most audiences saw a little bit of themselves in Thomas Magnum, minus the facial hair and bad holiday shirts of course.

Selleck was perfectly cast in a show that was effectively just a reworking of ‘Hawaii 5:0’ which had been created by the same network and shown from the late ’60s right up until Magnum, P.I began airing. In that respect, it was a passing of the torch.

The show crossed over with a few other US prime time investigative TV shows of the era such as ‘Simon & Simon’ which we never got over here in the UK so know absolutely nothing about and the big daddy of them all in ‘Murder, She Wrote’.

I’ve actually seen that one. Perennially meddlesome Jessica Fletcher comes to Hawaii to investigate an attempt to murder fellow novelist Robin Masters’ guests and Magnum is framed for it.

Fletcher proves he isn’t the guilty party of course. It wasn’t a great episode. You could tell Selleck was raging throughout that Lansbury was trying to move in on his patch. But it was only a one-episode deal.

Magnum’s dominance over the niche Hawaiian private investigations market was fully restored the following week as the busy body novelist toddled off back home to her own stomping ground of Cabot Cove in Maine. Jessica Fletcher never darkened Magnum’s door again, he never returned the favour and normal service of drinking imported bottled beer, wearing unwashed Aloha shirts, snoozing on the beach and occasionally raising a finger to help selectively chosen clients was soon restored.

Just a final thought. Selleck was originally offered the role of Indiana Jones in 1980 but was committed to Magnum so declined it. The role went to Harrison Ford instead. He went on to play it four times and to become a box office phenomenon and certified Hollywood legend. Magnum went onto parody the first Indian Jones movie, ‘Raiders of the Lost Ark’, in the episode called “Legend of the Lost Art” and even wore the identical attire with hat and whip etc in a nod to it all.

I think we can all agree that Selleck made the right choice and I’m sure he’s never lost a moments sleep over it. Yeah. Sure he didn’t!