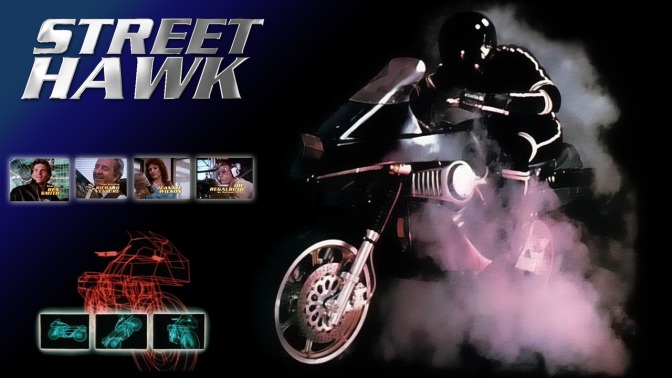 When you talk about popular 80’s TV shows pretty much all of the ones already covered get a mention. Knight Rider, The A-Team, Magnum etc are all up there. And rightly so. They ran for multiple seasons and encompassed a significant part of the decade. The addition of Street Hawk, therefore, is unusual in that it only lasted for one series featuring a rather paltry 13 episode run yet it always seems to come up in the conversation. The reasons for that are unclear. Most shows that last for only the one seasons do so for one main reason, that being that no one bothered to watch them. TV networks don’t cancel shows that are bringing in droves of viewers. So again it makes me wonder why this one seems so high up in people’s sentimentality for the decade. In that respect it falls under the ‘cult’ banner in that seems to have gained its following in retrospect as opposed to when it needed it, you know when it was actually on.

The intro is pretty much the most 80’s thing you’ll ever see or hear, brimming with both  astounding synth music and unashamed naffness at the same time :

So I’ll make with the back-story. This one is actually the least convoluted of them all. The central character is Jesse Mach who is an ex-motorcycle cop and an amateur dirt-bike racer who was injured in the line of duty and is now degraded to working as a public relations officer for the police force. He gets recruited into a secret project by the pernickety but likeable federal agent Norman Tuttle to ride a computerised, highly advanced, fast as hell motorbike with extreme firepower which you’ve probably gathered by now is called Street Hawk. It’s an offer Jesse just can’t refuse but not in that organised crime way where he doesn’t have a choice. No, he actually wants to do this most likely to alleviate the boredom of his monotonous day job. His mission is pretty simple, that being to continue his PR work during the day whilst leading a secretive double life as a clandestinely state sponsored vigilante who fights street crime with his awesome motorbike by night.

There was an opening narration that followed the above intro that probably sums it all up best:

“This is Jesse Mach, an ex-motorcycle cop, injured in the line of duty. Now a police troubleshooter, he’s been recruited for a top secret government mission to ride Street Hawk — an all-terrain attack motorcycle designed to fight urban crime, capable of incredible speeds up to three hundred miles an hour, and immense firepower. Only one man, federal agent Norman Tuttle, knows Jesse Mach’s true identity. The man…the machine…Street Hawk.”

It will come as little surprise that the show’s chief producer Bruce Lansbury, brother of Murder She Wrote’s pain in the ass Jessica Fletcher (Angela Lansbury), was also a producer on Knight Rider. I mean this is basically the same show with the Pontiac car subbed out for a motorbike. I’ll bet Lansbury was desperate to have the bike talk though that would have pushed the similarities into the bounds of all out ‘rip-off’ and even 80’s audiences were savvy enough to see through that.

My memories of the show are vague. The all black clad motorcycle and driver looked cool enough, the bike was armed with a machine gun as well as rockets and it was standard practice to have it propel itself over a car in slow motion accompanied by a launching sound effect at least half a dozen times an episode but that’s about it. In the grand scheme of things, the whole show lasted about 20 minutes. What I do remember though is the audio cassette adaptions of the novels. That’s right there are four novels based on the series that were released in the UK alone. Target books decided the show was ripe for the kid’s literature market so produced them. Regularly they would send me off to my nightly slumber. I always seemed to fall asleep right around the bit where Jesse was bitten by a black widow spider so God knows how they actually ended.

As for the cast, Jesse was played by a guy called Rex Smith. Just like you, I have never heard of him since either. Tuttle was played by Joe Regalbuto who has one of those surnames that only an American could have and is one of those actors who you recognise but can never figure out from where until you realise it’s probably just Street Hawk. Jesse’s superior, Captain Leo Altobelli was played by Hollywood and TV veteran Richard Venture. Altobelli was your typical 80’s police captain in that he was overworked, somewhat dishevelled, hard drinking, frustrated and often late to the crime scene. He was also far more concerned with the elusive Street Hawk’s vigilante crime fighting shenanigans as opposed to the bad guys that were being taken down. The show being pre-watershed though his language was watered down compared to his movie contemporaries so Venture had to perform a lot of lower lip biting and quick swigs of his bourbon.

There’s a documentary about the show you can watch online if you so desire that’s somewhat immodestly called “Street Hawk: The Making of a Legend.” along with all 13 episodes that can be found below: