Another chance to be totally underwhelmed and ultimately disappointed for the next four weeks as the great and good of international world football get together to decide who gets the golden trophy that looks like a shiny melting ice cream cone.

I watched the opening ceremony at my house on a sunny later Thursday afternoon. There was a very Russian theme to it. What could be more Russian than Robbie Williams running out to sing his classic pop hit ‘Let Me Entertain You’ in front of 80,00 people in Moscow’s Luzhniki Stadium?!

Apparently, Robbie stuck his middle finger up at the camera during his performance. That wasn’t shown on UK television. God knows how they knew it was coming. They did see it in the USA on Fox Sports though apparently. The Americans really do get all the best TV first, don’t they?! 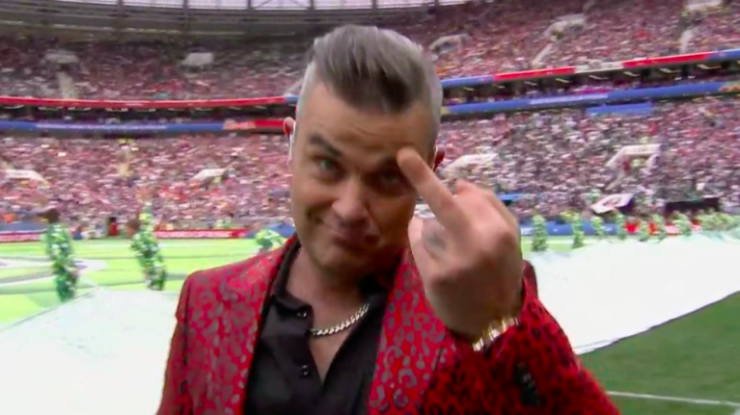 The original Ronaldo from Brazil then came on with a suit and let a kid pass a ball to a huge racoon or wolf or whatever the hell the mascot was meant to be before high fiving it.

Then FIFA president Gianni Infantino made a speech which included all the usual platitudes. Strangely he never mentioned his ousted and disgraced predecessor Sepp Blatter who was the one that awarded the World Cup to Russia in the first place. There’s no doubt some funny business took place to get the World Cup there. Dodgy late-night meetings in darkened car parks with brown envelopes changing hands – or whatever the modern-day web-based equivalent of that is – most likely occurred. But the reality is that’s probably how just about every World Cup destination in history got decided in some shape or form. Personally, I’m glad the World Cup is taking place in Russia. It flies in the face in all of the bullshit anti-Russian rhetoric we have piped into our living rooms regularly in the UK and the west in general.

The big man himself Vladimir Putin – all 5 feet 6 inches of him – then got up and did his best to smile as he welcomed the world to Russia and talked the brotherhood of football that knows no borders or creed, race, sex etc, etc.

To the match itself and the host nation horsed a pretty useless Saudi Arabia team 5-0. Who’d have thought that Saudi was bad at football, eh?!! Just about the whole world, I reckon.

Russia is actually the lowest ranked team at the tournament and truth be told they aren’t particularly good but I refused to believed that the likes of Saudi, Panama, Morocco, Costa Rica etc are any better. This game confirmed such convictions.

The first goal of the 2018 World Cup in Russia was fittingly scored by a Russian named Yury Gazinsky via a pretty simple header in front of goal. The star man of the day though was winger Denis Cheryshev who scored two beauties. His first saw him collect the ball inside the box and gently chip it over two hapless diving Saudi defenders before smashing it into the net whilst the two Saudis were still sliding towards the advertising boards. His second was a peach of a strike with the outside of the boot from the edge of the box that sailed into the top corner of the net.

Russia scored two more either side of his second. The first a nice headed finish from a 6’5 substitute they brought on and the final one a lovely free kick from the edge of the box that had the Saudi keeper making one of those dives where you know he knows he had no chance of getting it but felt obliged to what with the game being on TV etc. In hindsight, he probably should have just stood still and admired it. That fifth goal proved to be icing on the cake.

The Crown Prince of Saudi was in the stand sitting beside Infantino with Putin on the other side. The three of them sat jovially behind a plexiglass bulletproof window fist-pumping each other and all sorts. Every time Russia scored the Grand Prince turned round to Putin with his arms open as if to say ‘What the f*ck was that?’ in response to which Putin would shrug his shoulders apologetically as if to say ‘It’s not my fault your team are shit!’ That happened for all five goals and most likely on several other occasions over the 90 mins when the cameras weren’t on them. I wonder if they placed bets amongst each other. Putin and the Crown Prince staking a few million on the next goalscorer – pocket money to them – whilst Infantino was wondering where they were going for dinner that evening.

A pretty resounding win for the host nation. Always good to see the hosts doing well plus there was plenty of goals as opposed to the stagnant 0-0 or 1-0 games that have underpinned most World Cups since the bore-fest that was Italia 90′, a World Cup so boring in fact it ushered in 3 points for a win and the pass back rule. It wasn’t Italy’s fault – indeed they played some of the best, attacking football at that tournament – it just happened to be the geographic location where the world’s best international teams got together and decided football was no longer ‘the beautiful game’ but the game of ‘take no risks, dive when someone comes within five yards of you and whatever happens don’t get beat.’

Maybe this one will be different.