My father often reminds me that when I was a kid I would demand that the A-team be put on the family television set.

Of course, it was only one once a week that the show was actually broadcast so that shouldn’t have been a big deal but you know what fathers are like. 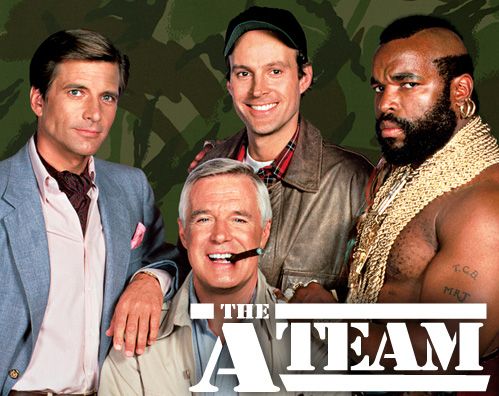 For a kid back then it really was essential viewing.

It had everything you wanted.

Big explosions, high-speed car chases, helicopters, tanks, machine guns, fistfights, people being thrown about in slow motion and of course no one ever got hurt. Not seriously anyway.

Nope, the bad guys would be seen off after a final showdown and would either promise not to do it again or be tied up and left for the authorities to deal with them.

I loved this show. You’d struggle to find any boy at that time who didn’t.

What made it, of course, was the characters.

The only real consistent ones were the actual A-Team themselves as they tended to move on to a new locations every week. Y

ou see they were soldiers of fortune who were wanted by the government.

Why may you ask?

Well, back in 1972 they were part of an elite military unit. A crack commando team you might say. At that time they were found guilty by a military court of a crime they didn’t commit. What exactly that crime was is sketchy at best. Anyway, they promptly escaped from a maximum-security stockade and ended up in the Los Angeles underground. Not literally. It’s more of a figure of speech. Like saying they live out with the norms of society what with being wanted by the government n’all.

The whole idea behind the show was that if you had a problem, if no one else could help and if you could actually find them, then maybe you could hire……….. The A-Team. A

The ‘A-Team’ itself was comprised of four members. They were all very specific.

Firstly there was, of course, the leader.

His name was Hannibal. He was played by Hollywood veteran George Peppard.

To sum up, Hannibal was the senior member of the team. He had white hair, wore a cream jacket, black gloves, seemed to be permanently smoking a cigar, often sported a knowing smirk and in most episodes would utter the immortal line “I love it when a plan comes together.”

A master of disguise he was also the tactical genius of the group.

Secondly, there was ‘Faceman’.

Played by Dirk Benedict, he was the suave, good-looking member of the team who could charm any woman and obtain anything required to complete a mission.

Thirdly there was “Howling Mad” Murdoch played by Dwight Schultz who has one of those real-life names that you only seem to get in America. Eccentric and unpredictable he was basically just mad as his name suggests. He flew the helicopters though when they formed a part of the narrative and was often broken out of psychiatric hospitals to help with the Team’s plans on several occasions.

And last but not least, of course, is pretty much the poster boy for the show, B.A. Baracus.

Played by WWF (as it was then) wrestler and Rocky III star Mr.T, B.A.was the muscle-bound African American who wore literally dozens of gold chains around his neck and took no nonsense from nobody. He never once lost a fight to my memory, except maybe once to a huge guy in a Mexican bar but it’s hazy.

The dynamic between the four was superb and all this despite the fact Peppard wouldn’t speak directly to Mr T on the set, so pissed off was he at the fact that the ex-wrestler had become the most popular character in the show never more illustrated by the fact he featured far more prominently on my A-Team bed sheets.

All four would generally make their way around the country in a black GMC van.

The van itself became as an iconic a vehicle as ‘KITT’ from Knightrider (a show we’ll cover later) even though it couldn’t talk or have an opinion about things. Some feat.

To this day anytime I see a black van my first thought is ‘A-Team’.

Faceman also had his own white Corvette which was as you’d expect pretty cool and highly desirable. He was a ladies man after all.

The Corvette would appear whenever Faceman had to make an impression either on some unsuspecting woman or on a bad guy type businessman he was trying to swindle. Even though he would often depart in the black van at an episode’s end with the rest of the team, the Corvette would still appear in later episodes.

How it managed to relocate itself is anyone’s guess.

Even as a 6-year-old this puzzled me.

Maybe it was a relative of ‘KITT’.

Or maybe they paid some unseen guy to follow them around in it.

A fifth member of the ‘A-Team’. His name could be ‘Gary’ and his character bio would simply be “Unseen guy who drives the Corvette to all locations where Faceman is likely to be when he himself isn’t driving it.”

Or maybe the script writer’s knew that people would lap it up any which way they served it so why bother to explain.

All are feasible options.

As with most of its contemporaries, the show was almost entirely episodic with the backbone narrative that they were on the run from government-sponsored military forces led by Colonel Decker as well as his various high-ranking colleagues, being the only constant.

There were two stand-out plot devices.

Firstly the team would often find themselves trapped in a garage or warehouse and against all the odds and via incredible feats of ingenuity, not to mention almost unfathomable engineering skills, with whatever just happened to be lying around, they would build something extraordinary and fight their way out successfully.

Secondly, no matter how many rounds were discarded via powerful semi-automatic machine guns, as a rule, no one ever got seriously hurt never mind actually shot.

Those were the two musts in any episode.

Well, those and Hannibal saying his line I quoted earlier, Faceman seducing a lady or hustling a crook, B.A. winning a fistfight and being generally displeased with the whole situation and Murdock acting crazy.

B.A. would also say ‘sucker’ and ‘fool’ a lot and would always refuse to get on a plane only to be tricked and drugged, usually by Murdock who he would then try and attack before passing out.

It would take too long to give an overall synopsis of the show’s entire run which spanned 5 seasons (or series as we call them here in the UK), 98 episodes and 4 years.

Though to be honest that last paragraph just about does it.

Written by Stephen J. Cannell, who is best remembered for his trademark typewriter scene where he discards a page behind him just before his production company logo came up at the end of any of his shows, it was officially cancelled and thus ended in 1987.

If it’s run in the country of its origin ran concurrently with the UK and when I watched it is difficult to determine.

It definitely did wrap in the late ’80s in the UK notwithstanding reruns.

Of course like most TV shows, cartoon, and movies from the ’80s it lived on for a few years in the consciousness of kids via merchandising which kicked into overdrive in that decade.

I recently found the remains of some of my old ‘A-Team’ figures.

Alas, they had been brutalised.

Most, as a result, had to be discarded but only after I’d checked any potential sell-on value on e-bay of course.

It turns out there isn’t much demand for half-chewed mass-produced near 30-year-old figurines that are missing various appendages.

In the succeeding years, I’ve caught some old episodes on cable and satellite TV channels like GOLD etc.

The novelty wears off pretty soon. And rarely have I ever watched more than a few mins once my initial smile fades.

Best not to delve back into ‘The A-Team’ via the more advanced and critical eyes of a 30 something. No, it’s better to leave them in the past, in my mind’s eyes and ultimately to nostalgia.